It’s whyday!. If you aren’t familiar with _why, ‘why the lucky stiff’ was an inspirational coder/musician/artist/poet who created incredible amounts of cool stuff and then disappeared precisely two years ago.

until programmers stop acting like obfuscation is morally hazardous, they’re not artists, just kids who don’t want their food to touch. -_why 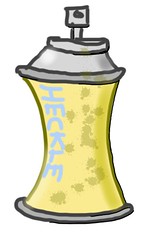 So, enough standing around.

It makes websites for node projects, based off of the package.json that node developers already have lying around for npm and that very very informative README.md that you should have around.

Heckle's home page is generated with itself →

That’s all! Not much magic, though it does choose a color from the name of your project, so each project has a slightly different shade but the shade your project gets will stay the same across rebuilds. It also, I am sure, features many bugs.

You run it by calling heckle, and so far it takes no arguments. It’ll take some soon, but it’s super-simple, and spits out really simple websites. On the plus side, it generates static HTML websites that you can just throw in a directory, on S3, on GitHub or DropBox or however you’d like to host them, and it does so in a way that hopefully requires minimal (if any) changes to your actual project.

You can install heckle if you have npm installed by running npm install -g heckle, or add it to your devDependencies if you’d like to be part of a build process.