Aaron Straup Cope’s work on archival software like parallel-flickr has been pretty fascinating.

I’ve been working on a clone of Tom Insam’s instabackup called permagram that provides a HTML/JS frontend and looks rather nice, if bare. Every once in a while, I run the python instabackup.py, it does its thing, and the photos are there. 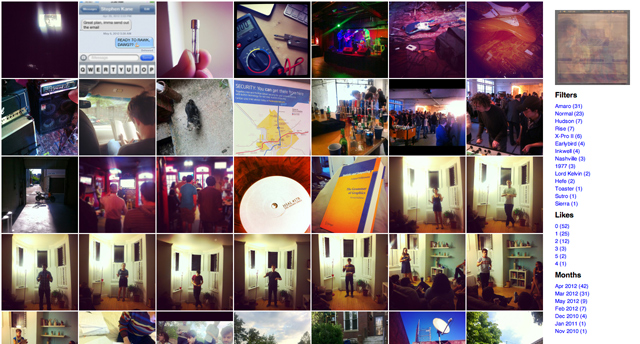 There could be a sweet spot of the simple, archival style in so-called data portals. Instead of complex software, could they be just S3, a static web frontend, JSON representation of metadata, and javascript to search and facet on the fly? The cost could become low enough that it keeps going after town governments cut funding.

I led a weekend session teaching Javascript at the MapBox office, resulting in a GitHub repository and wiki called ‘sweetcodejam’, that has code, reference materials, and toys for learning.

In the same vein, I’m working on a post for this site that’ll summarize map clients as a type, and some algorithm implementations to simplify other areas of understanding.

I finished the Frederick Run Fest half-marathon in 1:49:45.09, a time I’m pretty happy about. Above is the actual course diagram, and once you see the dragon, you can’t unsee it.

The number of people running with iPhones was unexpected, though the front-pack had more simple watches and dorkwatches like mine.